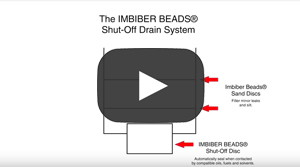 The IMBIBER BEADS® absorb the majority of the Dilbit within the first hour eliminating the liquid phase completely. Fresh diluted bitumen from the Alberta Oil Sands is absorbed by IMBIBER BEADS®.

In this test 50ml of Dilbit is added to 200ml of water and then full absorbed by 20ml of IMBIBER BEADS®.

Within the first hour the liquid phase of the dilbit is essentially eliminated. Watch this clip to see the IMBIBER BEADS® gravity fed, containment drain system be recognized by the Tech Museum of Innovation for design and performance.

Incorporating IMBIBER BEADS®, the drain systems completely seal the leak path in case of a organic chemical spill without the need for mechanical/moving parts, electricity or human intervention.

The Today Show's Al Roker talking about the performance capabilities of IMBIBER BEADS® when responding to water based spills of hydrocarbons. Watch the video to see the capture and containment capabilities of each technology on a 12L spill of Jet Fuel. IMBIBER BEADS® were part of a 7 year study conducted by the Maritime Disaster Prevention Center and the Japanese Coast Guard. The purpose of the study was to find the most effective technology for responding to Hazardous & Noxious Spills on the open sea.

A list of technologies were used in a series of tests with Japan's 162 most imported/exported chemicals. IMBIBER BEADS® were found to be the only product capable of fully capturing, containing and reducing the rate of vapor release. In under 30 minutes IMBIBER BEADS® fully capture and contain a Diesel Fuel spill during our test. The liquid phase of the organic chemical has been eliminated greatly reducing the likelihood of combustion or inhalation of toxic fumes by first responders.

The now imbibed liquid cannot be released from the IMBIBER BEADS® providing the best of all disposal alternatives. The aBsorbed gasoline cannot be released from the IMBIBER BEADS® packet by any means including squeezing or cutting in half. Once aBsorbed the IMBIBER BEADS® will not release the crude oil if squeezed, cut in half or any other methods eliminating the risk of secondary contamination. Imbibitive Technologies is advancing environmental protection, recovery and sustainability through the development of innovative products. We are the exclusive manufacturers of IMBIBER BEADS®, a super aBsorbent polymer used to imbibe organic chemicals from both water and land applications.